(CNN)They were golf’s band of brothers. “The Golden Bear,” “The King” and “The Black Knight” shared 34 major wins between them and irrevocably changed the sport they played.Through a combination of Arnold Palmer’s “swashbuckling” style of play, Gary Player’s sheer willpower and Jack Nicklaus’ utter brilliance, this triumvirate of golf greats catapulted the game into the modern era.If the trio came to redefine how golf was played between the late 1950s and the early 1980s, unusually for sporting rivals, they also formed lasting relationships along the way — so much so that the wives of Nicklaus and Palmer were best friends too.”We were a big three in friendship, like brothers,” the 85-year-old Player told CNN’s Living Golf. “We traveled to China, we’d travel to South Africa, all over Europe.”We went all over the world, Australia, everywhere together. And we basically lived together, playing a lot of television matches and exhibitions together.”Player remembers having a confrontation with Palmer on one of his courses, but the “affection” they had for each other made it easier to reconcile.”We went in and we had lunch together and I can vividly remember, we were both crying because I think we had such affection for each other that we didn’t want it to have an effect on our friendship. And so we laughed together as well as crying together.”

‘That man’s going to be a champion’

Palmer was the first of the trio to attain golf superstar status. Even the great Nicklaus, the man who has won the most majors in a professional golf career, admitted that he was part of “Arnie’s army” during his early years.Nicklaus remembers putting a driving clinic on in Athens, Ohio as an 18-year-old with Palmer and outdriving his rival by 40 yards.Nicklaus remembers saying to Palmer: “I just knocked it by you 40 yards.” Palmer replied: “Yeah, but I shot 63 and you shot 67.”South African Player recalls seeing Palmer hitting balls on a practice tee in 1957 and thinking: “Well, that man’s going to be a champion.”Player’s prediction was prescient. A year later Palmer won his first major title, claiming the famous Green Jacket as a 28-year-old. He was to don the Masters’ Green Jacket three more times, as well as winning the US Open in 1960 and the Open Championship twice.Assisted by his agent Mark McCormack — who would eventually represent both Nicklaus and Player — Palmer became a global superstar, traveling around the world to showcase his skills with his clubs and aided by the charisma he “oozed,” according to the South African golf legend. 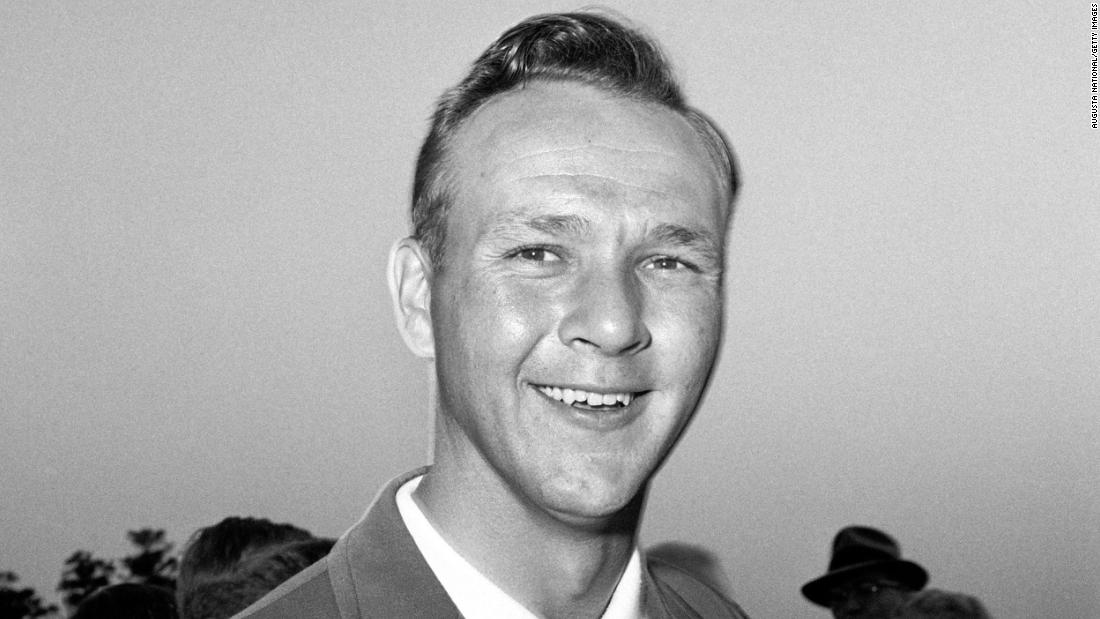 Palmer smiles during the presentation ceremony at the 1958 Masters tournament.His passion for the game was prodigious, according to Player.”Even as he got older, he really couldn’t break 90, but he still wanted to go out there and play with the members and with people,” Player said.Palmer’s rise to prominence was accompanied by the advent of widespread television across the US allowing people across the country to watch him win his maiden majors.”They loved the common man who rose to the top and slew all the dragons,” Nicklaus explained.But it was Palmer’s style of play on the course which really made him such a likeable player to spectators. The 18-time major winner Nicklaus calls him a “Robin Hood” of sorts.”He seemed like he wanted to hit it into the woods, so he could hit a spectacular shot out and thrill everybody,” he said. “And he did that. He hit it in the woods a lot, and he had these spectacular shots that everybody related to.”And he excited everybody. He hitched up his pants and had a cigarette hanging out of his mouth.” 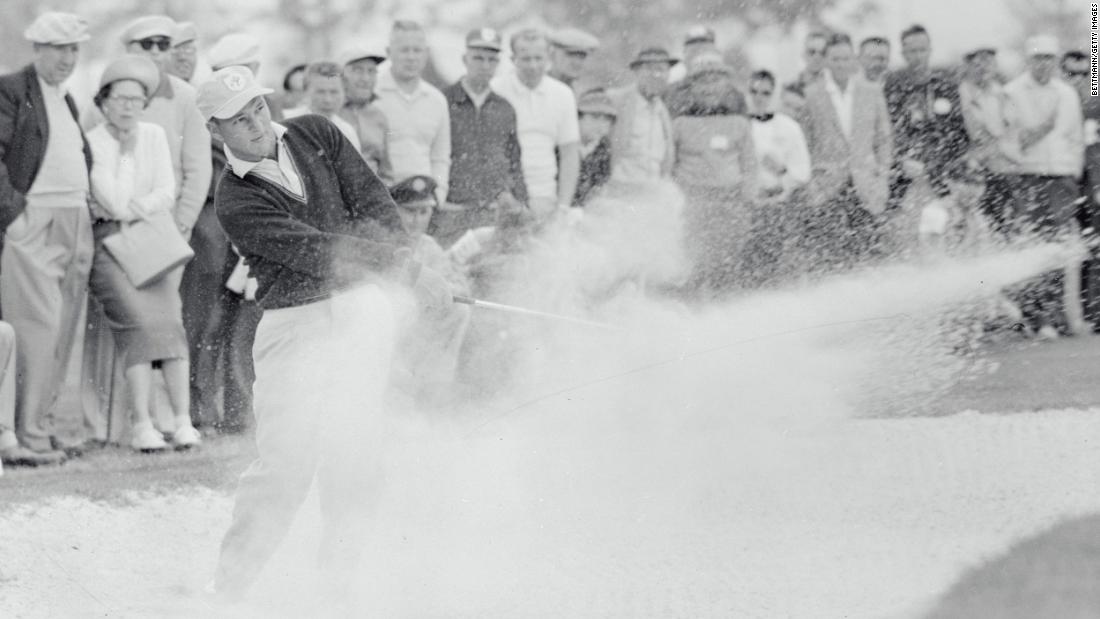 Palmer plays a shot from the bunker at the seventh hole at the Desert Inn Country Club.

The competitive nature of golf’s self-professed “Big Three” drove them onto bigger and better things.Nicklaus and Palmer often played themselves out of contention for tournaments, such was the competitive fire between the two, according to the 18-time major winner.Nicklaus especially remembers the 1975 Masters, in which they were both near the top of the leaderboard after two rounds.”We were playing the third round and I shot 73 and Arnold shot 75. And we shook hands on the last hole and he says: ‘We did it again. Here we are shooting ourselves out of the tournament.'”I came back, shot a good last round and ended up winning the tournament. But Arnold effectively shot himself out of the tournament. And that’s not the way to play golf.”You play golf by controlling yourself. And you’re the only person who you can control, not the field. So you have to take that into consideration, but we didn’t. We were too stubborn. We were too competitive.”Including his 18 majors, Nicklaus won 73 PGA Tour victories — the third most ever. Palmer collected 62 PGA Tour victories, the fifth most ever. Player had 24 PGA Tour victories, while also racking up a remarkable 116 international wins.Player draws similarities between the trio’s passion and drive and the competitive spirit that Tiger Woods — the 15-time major winner and tied for the most ever PGA Tour victories — brings to the game.”We were as fierce as competitors that the world has ever seen,” says Player.”But the thing is we had great affection for each other. When we were on the golf course and we made it very clear: ‘I want to beat you. And if you beat me, I’ll look you in the eye and say well done.'” 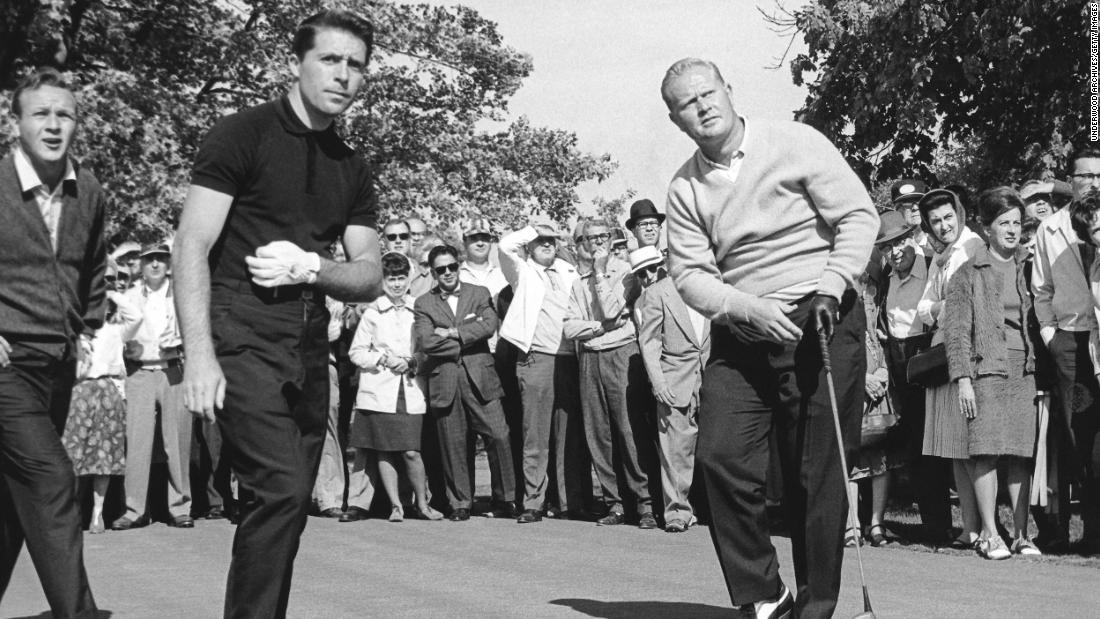 Palmer and Player follow the flight of Nicklaus’ tee shot at the Firestone Country Club, Akron, Ohio in 1965.

While the Open Championship is one of the most sought-after accolades in golf globally, that wasn’t always the case.Player had won the major in 1959, but before Palmer made his first appearance there a year later, very few American golfers had made the journey over to the UK to participate in the tournament.Arriving as the reigning Masters and US Open champion, Palmer brought a certain level of cachet to his compatriots watching back home on his way to a second place finish, according to Nicklaus.”The Scots loved him. And playing at St. Andrew’s and Kel Nagle beats him by a shot. And all of a sudden, all American players wanted to go to the British Open,” said Nicklaus. 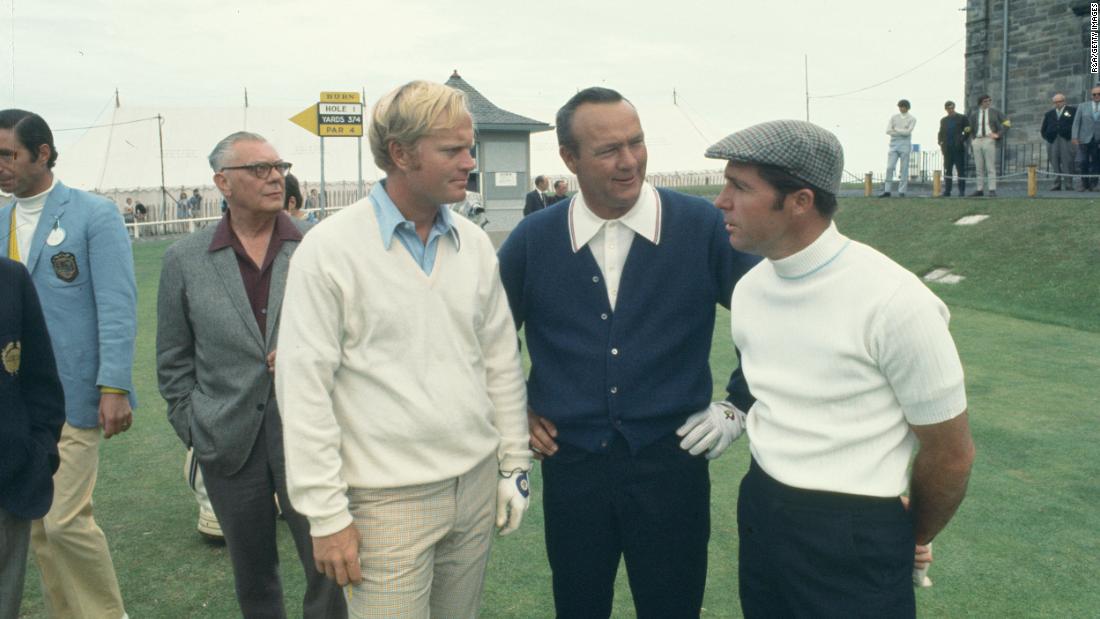 Nicklaus, Palmer and Player are pictured at the Open Championship in 1970 at St. Andrew’s.Fast forward to the 149th Open at Royal St. George’s in July and 51 US golfers featured in the 156 strong field, including eventual winner Collin Morikawa.Although Player says the Open “would be what it is today without” Palmer’s influence, he does believe that the American’s arrival at the event helped bring extra eyeballs to it back in the US.”The Open Championship with Ben Hogan and Sam Snead and Gene Sarazen and Peter Thomson and Roberto De Vicenzo and you can go down the list of hundreds of guys that helped make the Open, this great championship.”Did Arnold Palmer enhance it when he came across? Yes. Here was this charismatic man playing so well in America, comes across, certainly, it did the Open an immense amount of good, but we can never give one man the credit for the greatest championship in the world.” 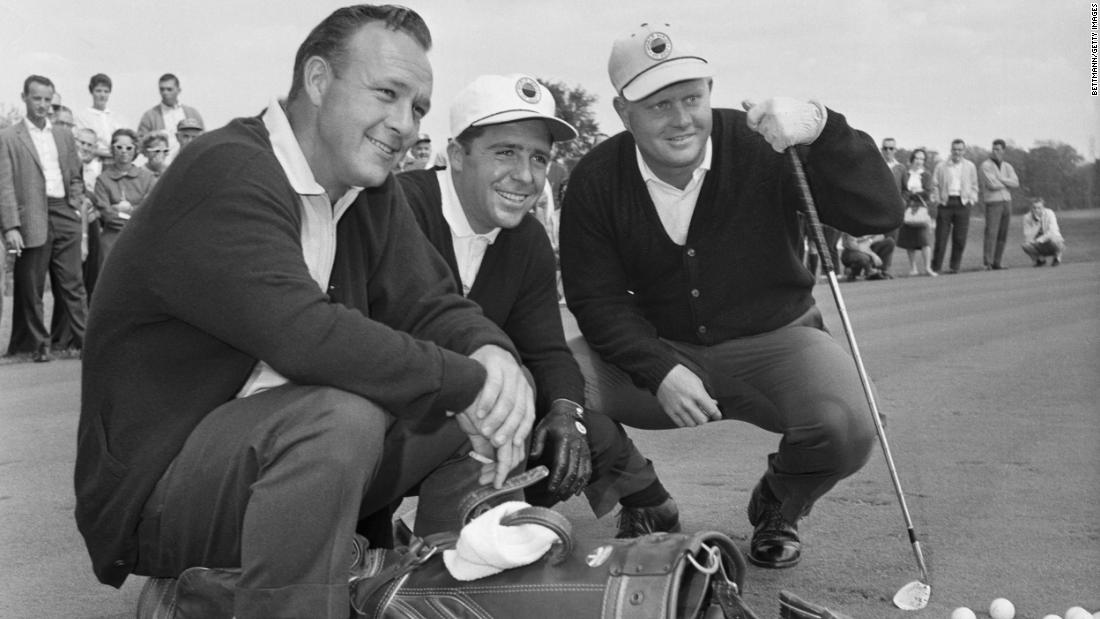 Palmer, Player and Nicklaus pose with their golf clubs before a practice round at the Firestone Country Club in Akron, Ohio.Since his death in 2016, Palmer has been honored throughout the game of golf and the even by the US Postal Service — they issued a commemorative stamp honoring the golfing great in 2020.”I think most of the guys realized what Arnold did for the game was more than anybody else,” said Nicklaus, as he paid tribute to his “hero.”Visit CNN.com/sport for more news, features, and videos“His influence in the game, his demeanor, the way he handled himself, he needed to be stately when he needed to be stately, presidential when he needed to be presidential, humble when he needed to be humble. Arnold did a great job of all that. And I think we all owe him a great deal,’ adds Nicklaus.”Not only do the pros owe him a great deal, the game of golf owes him a great deal. It’s been five years, but I miss my buddy. 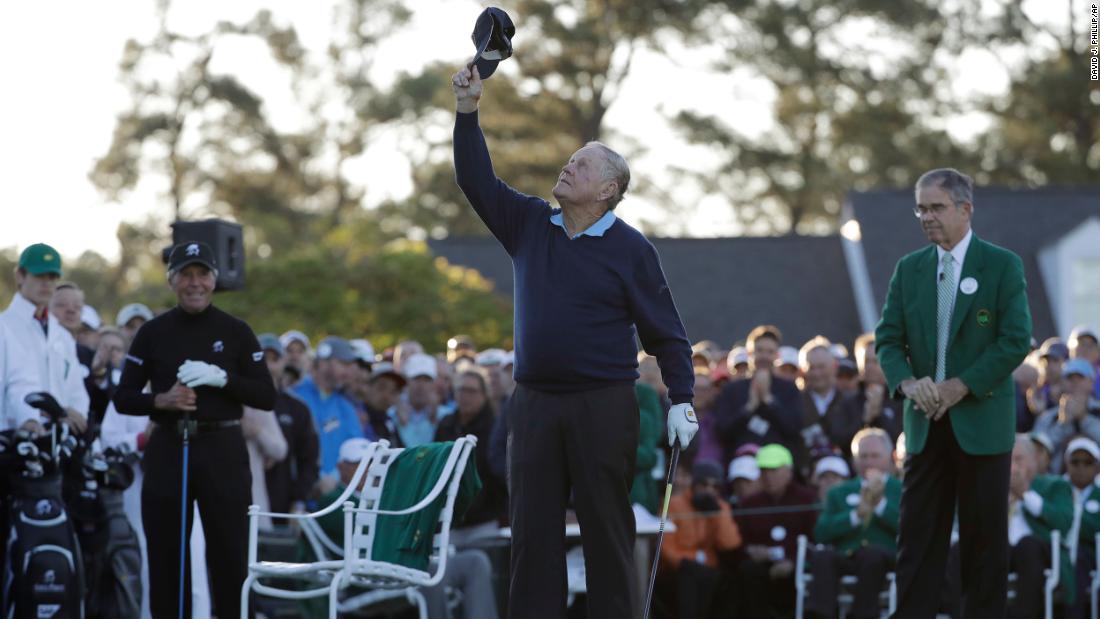 Nicklaus looks up to the sky to honor Palmer before hitting an honorary first tee shot for the ceremonial start of the first round of the Masters in 2017.”I talked to him about two weeks before he passed. And he was his typical self. I said: ‘How’s it going, AP?’ He said: ‘I think I’m getting ready to go out and hit some balls. I’m really feeling good. As best as I’ve felt in a long time, I’m looking forward to getting out there.’